Mastering the art and science of sales can be exceedingly difficult. It takes time to cultivate business relationships and to understand the psychological cues that make or break a deal.

Kyle Guinness, a junior at the University of Pittsburgh College of Business Administration, has been perfecting his craft in sales during the past year. He interned in a sales role with Cintas this past summer and also completed the Pitt Business Professional Sales Academy, a co-curricular program that teaches students the sales fundamentals.

Now he has some impressive hardware to show for his hard work.

“It was nice to get the win because the competition is right in our hometown,” Guinness says.

Joining Guinness at the winner’s circle was Pitt Business student Arthini Pulenthiran. She placed third overall, despite being a late addition to the competition roster.

According to Guinness, two things helped Pitt Business claim two of the top spots at the sales competition.

First, both he and Pulenthiran are members of the Pitt Business chapter of the American Marketing Association (AMA). The AMA has a subgroup dedicated to the sales profession. Leading up to the competition, Guinness and others practiced for more than an hour each week. [View student organizations at Pitt Business]

Second, Guinness and others received the support of Pitt Business Executive in Residence Robert E. Butter. Currently a principal at Veritas Communication Advisors, Butter has more than 30 years of corporate and marketing communications experience.

“The AMA sales team at Pitt invited me to coach the group on techniques to make a case and to sharpen their presentation techniques. In general, my role was to be their chief encouragement officer to validate their confidence and competence level in consultative selling,” Butter says.

Butter, who is an instructor of the school’s course Fundamentals of Business Communications, also supports Pitt Business students by reviewing their resumes and offering career advice on internships and jobs. Students can set up an appointment with Butter through email.

Shortly after the Duquesne sales competition, Guinness and several other Pitt Business students traveled to Orlando, Fla. to compete in the International Collegiate Sales Competition, sponsored by Florida State University. The AMA and Pitt Business helped cover their expenses. While Guinness and his classmates weren’t among the winners, it was still a “great experience,” he says.

Audrey J. Murrell, associate dean of Pitt Business and director of the David Berg Center for Ethics and Leadership, praised Guinness and his classmates for developing their skills and experiences in the sales industry.

“Sales positions are a fantastic starting point for many lucrative careers, whether it be moving up the ladder into managerial sales positions or moving into different positions in a company,” Murrell says. “I applaud Kyle and Arthini for their case competition win, and their success in going From the Classroom, To the City, To the World.”

Guinness, who is majoring in marketing and earning a certificate in innovation and entrepreneurship, plans to work in a B2B sales role at a large company after graduation. Cintas, ADP, and Salesforce are among the companies with which he’d like to work.

Thanks to his experiences at Pitt Business, he is a step closer to mastering the art and science of sales. 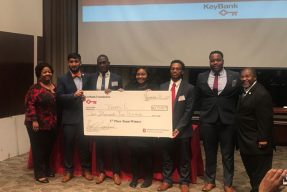 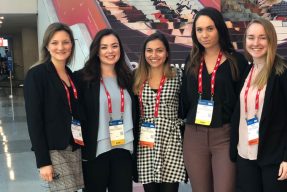 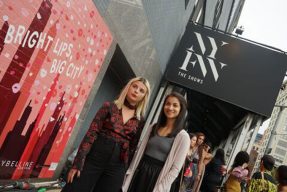